In Perspectives on the Sea --- our brand new *Outlook* series --- we look into how simulation can help us face societal challenges, particularly those related with the ocean.

We start off by looking at alternative, nature-inspired solutions aimed at protecting the coastline. Let’s have a look at wetlands and how we can simulate them.

After the first reports came in during the 80s, the overwhelming evidence piles on. The world climate is becoming more irregular, the sea level is demonstrably rising and evermore frequent extreme weather conditions are hitting the shoreline [1].

These are not alarmist soundbites. 40% of the world population lives in coastal regions [2] and a whopping 10% lives less than 10 meters above sea level [3] — that’s about 750 million people.

With estimates that about a third of the entire world coastline is at high risk of flooding, erosion and accelerated biological degradation (and with those, a corresponding loss of property, resources and human life), it is no wonder the situation at large is dire.

Take the United States of America alone, where an estimated 50,000 miles (or 80,500 kilometers) of coastal barriers need to be erected [4]. That’s already twice the perimeter of the entire planet Earth.

Unsurprisingly, their associated costs are equally monumental. By 2040, 42 billion dollars will be needed to protect coastal cities with 25,000+ residents and a further 360 billion to protect even smaller cities [4].

This protection is conventionally achieved with immobile and solid structures, such as breakwaters and seawalls, which are primarily designed to reduce the chances that incoming waves overtop infrastructure on the coastline. 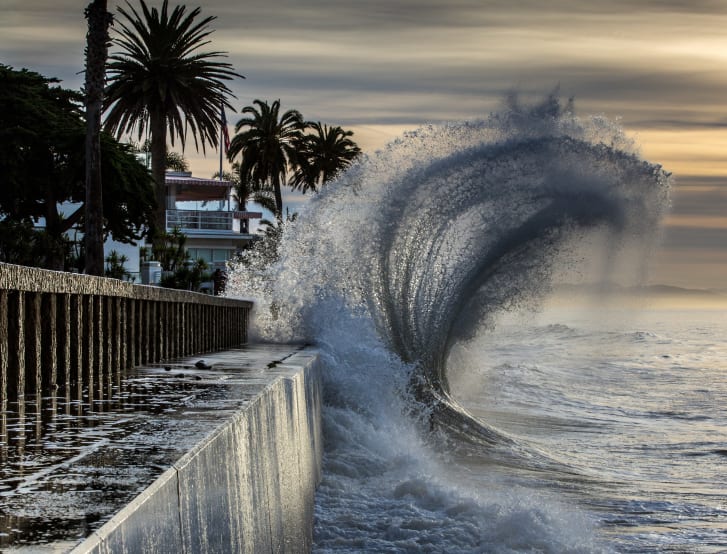 However, the toll on the environment for obtaining the necessary resources to build this kind of structure is hard to fathom. As an example, let us consider concrete, for which producing a cubic meter releases about 236 kg of CO2 into the atmosphere [5].

If we were to erect a 5 meters wide and 10 meters tall seawall along the coastline to be protected, the CO2 emitted from producing the necessary cement would come close to

This solution is somewhat paradoxical: if, one the one hand, erecting seawalls is intended to mitigate the adverse effects of rising sea levels, then on the other hand, building them further amplifies the causes behind rising sea levels.

Man-made structures can certainly protect many coastline profiles, but there is no guarantee these solutions provide generally superior protection to, perhaps less conventional, alternatives.

Evidence for erosion and geomorphological changes in the nearby areas should make us wary these solutions may not be as optimal as intended.

But are there other working solutions?

Sometimes we don’t need to look any further than what is before our eyes.

Recently, there has been a growing interest in nature-inspired alternatives, that may not only efficiently protect some coastline profiles under certain storm conditions, but also mitigate their erosion on a carbon-negative balance, while keeping aesthetically pleasing standards.

For millions of years, land transformation due to harsher incoming tides and wind streams led natural habitats and their species to embark on a truly remarkable journey of adaptation.

The end product? Wetlands — water and vegetation-rich muddy environments which act as a kind of buffer between land and water. As natural ecosystems, they thrive in such hostile conditions and are effective in shielding the main inland. 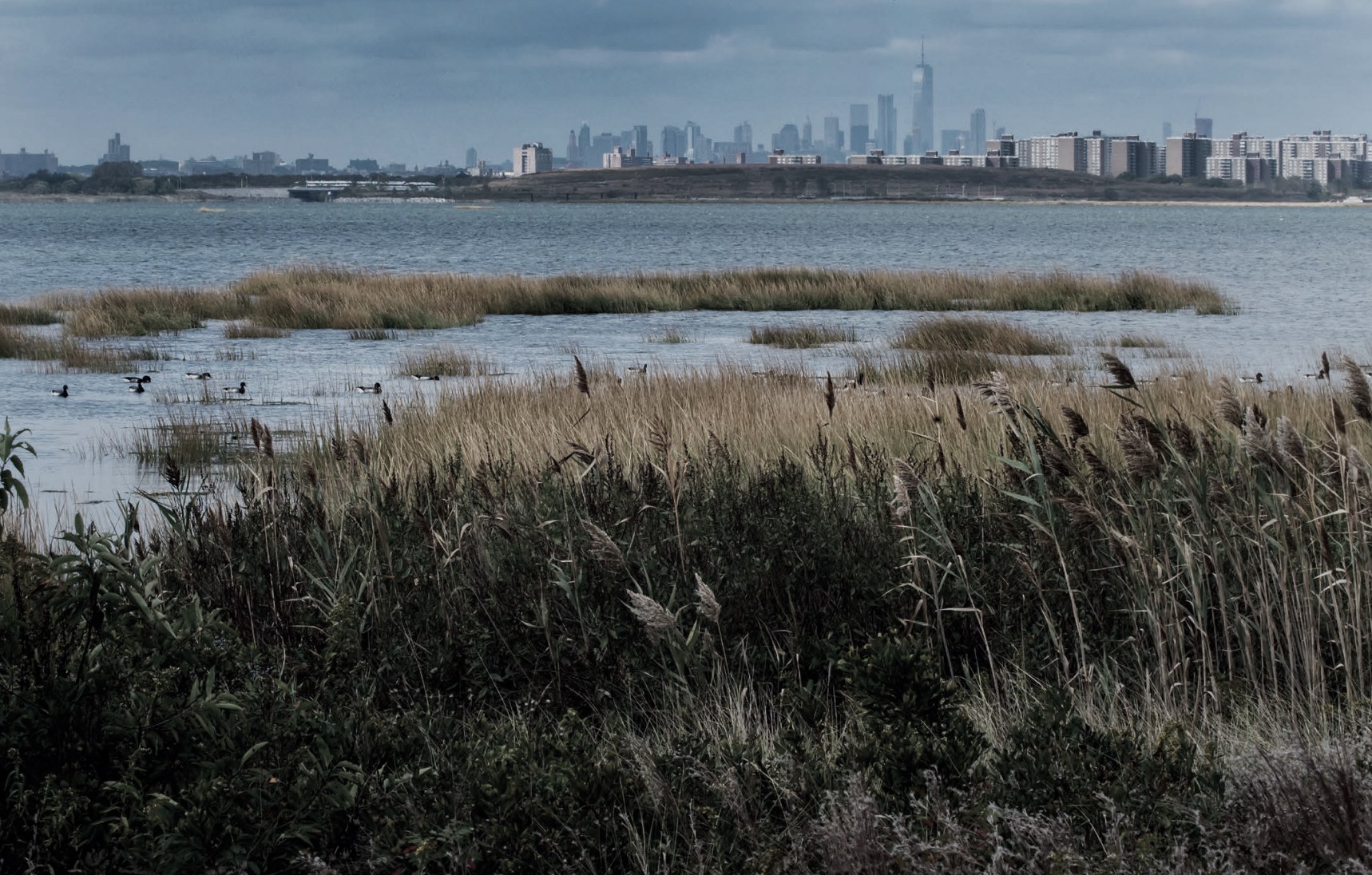 Wetlands can vary in type from lush forests to mushy grasslands yet they seem to share something: their ability to protect the inland from harsher weather conditions, at least to some degree.

Let us explore the main features of two wildly different types of wetland: mangrove forests and saltmarshes and see how well they fare in protecting the coastline. 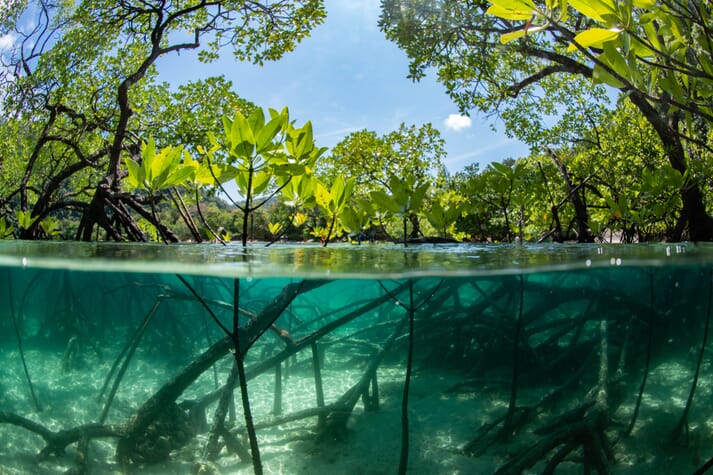 Mangrove forests or mangals are swampy woodlands, normally found in intertidal tropical or subtropical areas, and made up of salt-tolerant high-rise trees.
Below them, their roots form an intertwining nest, which is constantly submerged.

These forests have proved to be invaluable in controlling moderate flooding events and mitigating the effects of harsher phenomena, such as hurricanes, tsunamis and storm surges [8].

Fig. 4: A birds-eye view of a saltmarsh (a type of flat wetland). Credits: The Wild Life Trusts

On the other side of the spectrum, saltmarshes (or tidal marshes) are swampy lands with low-rise vegetation, such as seagrass and other species of bushes and turf.

From low-tide creeks, to mudflats and to the marshes surrounding hard soil patches, a delicately balanced system of intertidal lagoons, muddy ponds and islets cover a vast flat area, soaking up the water as the tides come in and out [9].

Fig. 5. As the tides come in and out, the marshlands host a rich variety of different ecosystems and protection solutions to the incoming water. Credits: McGill University

Saltmarshes are especially relevant in the way they prevent the incoming water from gaining speed by dispersing its energy across irregular and sluggish, muddy land patches.

Yet the main point still stands: just like seawalls, we would also like to quantify the suitability of wetlands in protecting the coastline.

It goes without saying that it is inconceivable we would reach any conclusion by building real-life replicas and taking measurements on them (even if tank experiments were built).

We need smarter methods and simulation offers a way.

Needless to say, at Inductiva we're in to accelerate simulation.

Stay tuned for our next installment:
we will look into how the power of simulation can be leveraged to find optimal wetlands solutions for coastal protection.

Perspectives on the Sea
Outlook The Science Behind the Perfect Surf Wave
August 31, 2022

In this Outlook series, we look into how the extent of protection afforded by specific artificial reef components can be measured. This task is challenging in itself but progress can be made with the aid of either simulation or experimental data from hydraulic experiments.