In our first installment, we introduced wetlands as an alternative, nature-inspired solution to protect the coastline.

That’s not enough. We must also benchmark how suitable these (and other) proposals are. Simulation allows us to do just that by numerically estimating the necessary physical outcomes in a reliable and scalable way.

In this post, we show how a simulator can be deployed to assess the degree of coastal protection offered by a realistic scenario at an iconic beach in Portugal.

Waves come in, waves go out

Understanding the physical principles behind the dynamics of seawater (and other fluids alike) is remarkably difficult.

Fortunately, the complexity underlying the behavior of fluids — from honey dripping down to smoke swirling around — can be expressed in one of the most foundational cornerstones of Physics.

By applying principles of conservation of momentum and mass, the Navier-Stokes Equations (NSEs) provide a framework to predict how the velocity of a huge class of fluids evolves, for custom setups [1].

Video 1: Flow across a 2D channel with obstacles, simulated with the NSEs. The patterns observed are intricate and come from small-scale effects that propagate in time. Credits: José A. Fonseca.

They are powerfully general. Unsurprisingly, this comes with a high price tag.

The NSEs are notoriously difficult to solve in a stable way [2]. Computationally, the algorithms employed tend to be extremely expensive, both in terms of memory used and runtime.

There are ways out. However complex, fluid dynamics can be simulated in much simpler frameworks if we are willing to lose some refinement.

Fortunately for us, we are in such a position.

In the context of coastal protection, we are interested in how the wave surface (e.g. the wave top) evolves in relatively close areas to the shore.

As a consequence, flow details occurring deep down or further offshore do not fundamentally change the significant properties of the wave when it later breaks.

When water waves propagate in low-depth media and their horizontal scales are far greater than their vertical scale, we can simplify the NSEs by only considering depth-averaged speeds.

This leads to a lighter treatment of the problem, whose theoretical model is prescribed by the Shallow Water Equations (SWEs) [3].

Video 2: Evolution of surface waves on a 2D region caused by a round of 5 incoming falling drops, simulated using the Shallow Water Equations. Credits: Dan Copsey

The assumptions employed in the SWEs are well suited to model the relevant hydrodynamic effects close to the shore.

But we are not done yet.

For now, suppose that we would like to assess how effective a certain intervention is in protecting a particular section of coastline from strong waves.

For that, two scenarios need to be simulated: for the same sea conditions (e.g. wave frequency, amplitude or orientation), one with and another one without that intervention.

A simulator must then be able to solve the SWEs when considering the presence of the proposed structure. Many simulators exist with specific implementations and interfaces [4].

We will focus on SWASH (Simulating WAves till SHore) [5], an open-source tool for simulating a wide variety of hydrodynamic phenomena.

A Case Study
Erecting a seabreak at Praia do Carneiro Beach

Let’s exemplify this idea by benchmarking the effect of a rectangular breakwater structure, to be hypothetically erected at Praia do Carneiro beach in Porto, Portugal.

For a simulation considering such a simple structure to run, only a handful of parameters need to be specified: the breakwater dimensions (length, width and height) and its location.
Within SWASH’s API, this structure can be specified by overlaying a hard box on to the seabed.

Evidently, the water flow around this obstacle will be affected.
But how exactly?

We can visualize this contrast by plotting, say, a colormap of the speed across the region as the offshore waves come in. If a spot measures speeds above a critical threshold for too long, we mark it red.

Video 3: Evolution of the wave velocity for some sea conditions simulated for two scenarios: one without a breakwater (top) and another one with it (below). If this structure were to be built, it seems that the beach would be shielded from dangerous, fast waves. Credits: Fábio Cruz / Inductiva

As the waves get reflected once they bounce right off the structure, it is clear the area directly shielded by it is protected.
The breakwater can also be seen to deflect some waves laterally. These, in turn, interfere with the incoming unrestricted waves.

The combined effect? For this profile of incoming waves and time frame, the entire extent of the beach is now protected from potentially dangerous waves due to the presence of the breakwater.

In principle, we should apply the same ideas to a wetland. However, this type of intervention is nowhere as simple as a breakwater: 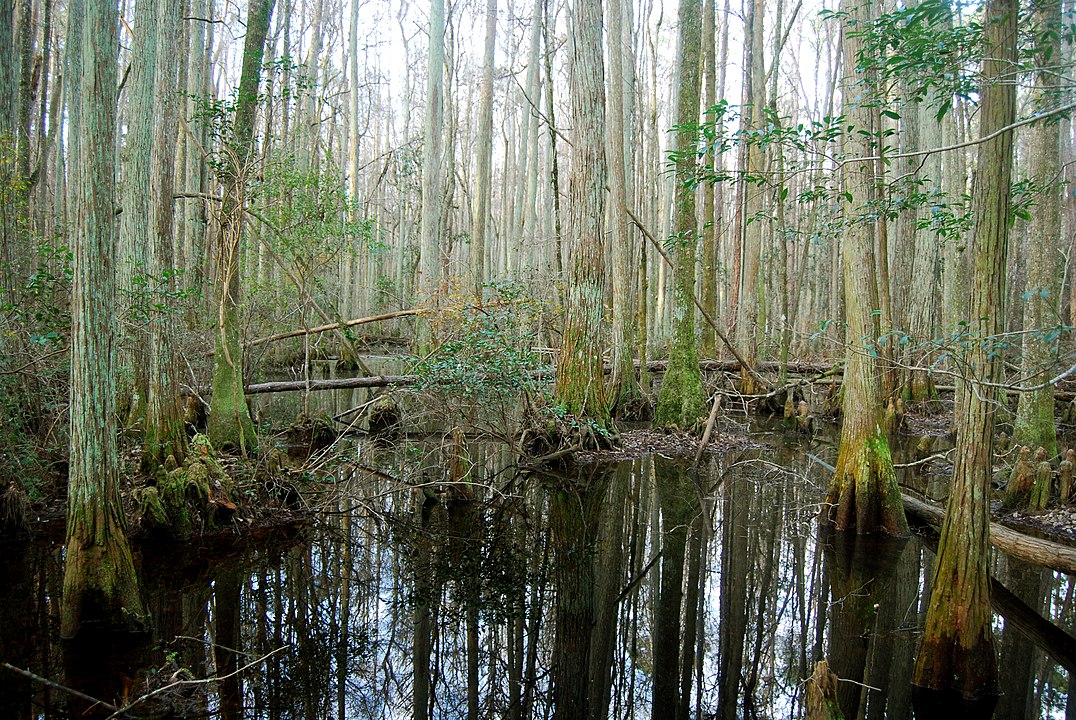 We are back to a stage where the complexity of an element may become a bottleneck for simulation.

Fortunately, the same solution principles hold again: with sensible modeling, structures too can be stripped away of over-refinement and specified to an adequate level.

This is exactly what we will show in the next installment of Perspectives on the Sea, where we detail how simulations of scenarios where wetlands may protect the coast can be set up and run.

[1] - The Navier-Stokes Equations - MIT Mathematics Here is a more detailed explanation of the Mathematics behind the NSEs.
[2] - Numerical Issues - Numerical Instability A down-to-earth explanation of how to set convergence criteria in the NSEs.
[3] - Lecture 8: The Shallow-Water Equations An excellent reference where the SWEs are introduced and explained in a mathematical way.
[4] - github repositories names ‘shallow-water-equations’ Given the popularity of the topic, there are tens of github repositories dedicated to solving the SWEs.
[5] - SWASH official page Documentation and feature explanation of the simulator we use.

Perspectives on the Sea
Outlook The Science Behind the Perfect Surf Wave
August 31, 2022

In this Outlook series, we look into how the extent of protection afforded by specific artificial reef components can be measured. This task is challenging in itself but progress can be made with the aid of either simulation or experimental data from hydraulic experiments.